I’m a former academic who is now a full-time editor. As an academic, I attended many international conferences, did lots of fieldwork, and had family to visit back home. This meant that I was sitting on a plane at least once a month on average, if not more often. I was of course fully aware of what this meant in terms of carbon emissions and yes, I was (and am!) a total hypocrite, like everyone else. Since I left academia in 2017, scholars have become increasingly aware of their carbon footprint. Many have decided to fly less; this blog is one example of what can possibly be called a trend of low-carbon academic practices (this blog is another one). This flight shaming finally made me decide that, if I can help it, I will no longer fly within Europe (shaming works, people!).

While I have no more fieldwork to do, editors have conferences too (yay!), so when I registered for my first-ever SfEP mini-conference in Newcastle, I booked the overnight ferry from Amsterdam (IJmuiden) to Newcastle (North Shields) and (eventually) launched the hashtag #lowcarboneditor. On Twitter and on the SfEP-forums, I quickly became known as That Dutch Girl Who Is Taking a Boat to Get Here (and Who Is Bringing Us Stroopwaffles). I was warned that this ferry is a notorious party boat, full of English stag-dos and hen parties. This was worrying, because I had pictured myself sitting on deck with my book and a pint like a good (bad) nineteenth-century aristocratic lady, not trying to dodge projectile-vomiting adolescents.

As it turned out, I had nothing to worry about. The ferry is like a small cruise ship, with plenty of entertainment options located on one side of the boat and the cabins located on the other, which means that you can sleep in peace. Moreover, the audience consisted not only of drunk English people but of a surprisingly large amount of older Germans, primary school children, and middle-aged Dutch couples as well.

My mom drove me from Amsterdam to IJmuiden, but there’s also a shuttle bus to the ferry terminal that departs from the center of Amsterdam or a public bus, if you’re willing to walk a bit. The company allows you to check in hours before departure (which is at 5:30 p.m.), so you can get settled into your cabin and grab a coffee (or a beer, if you are so inclined).

Cabins come in different classes, and you always book the entire cabin, not just a bed. This meant that on the way to Newcastle, I paid the same for a two-bed cabin on a higher deck as I did for a four-bed economy cabin on the lowest deck on the way back to the Netherlands (in both, the upper beds fold up). I gotta say, the idea of actually sleeping underwater was slightly terrifying, and the watertight doors on that deck that close in case of flooding did not help. At all. In any case, book way in advance if you want to secure an upper-deck cabin. I booked this trip (which took place at the end of May) in February and they were already gone for the way back. 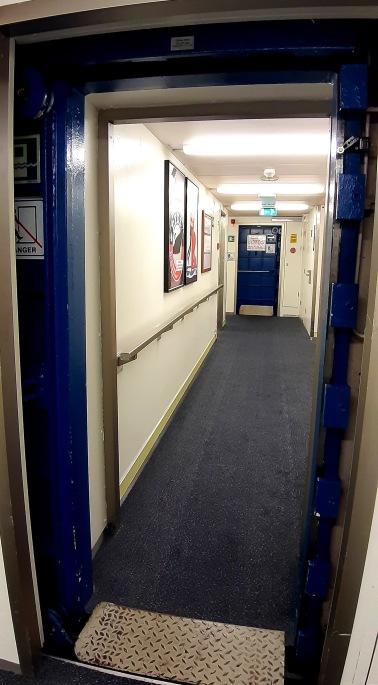 Four-bed cabin on the way back.

Two-bed cabin on the way to Newcastle.

The boat it self has a bar, two restaurants, a small casino, a cafe, a cinema, a children’s play area, a shop, a sky bar on the top deck, and more. It really is like a small cruise ship. It’s about a million times more comfortable and fun than traveling on a plane. Also, there’s no phone reception and wifi unless you are willing to pay a lot, which constitutes a good fifteen hours of digital detox (or, in my case, the opportunity to edit until the early morning hours without distractions).

The best thing about this trip, however, was our arrival in Newcastle. This was nothing short of majestic, with the excitement of land in sight a few hours before actually docking, everyone standing outside on the decks as the ferry slowly made its way toward Tynemouth. It was at this moment that I solemnly vowed to treat myself to boat trips as often as possible.

So, are there any cons in this story? The trip takes fifteen hours, but potentially saves you two hotel nights (although the boat’s arrival at 9:15 a.m. in North Shields is not ideal if you have something in the morning; it takes about an hour to get to town from the ferry terminal). It’s not as cheap as flying, but if you can split a cabin you can travel for as little as 25 euros one way. If you can spare the time or are flexible in terms of where you work, I cannot recommend this trip more!

2 thoughts on “The Low-Carbon Editor: A Trip to Newcastle”